The Evolution of Futsal

How The Modern Game Was Born

The game of futsal constantly evolves. From season to season it isn’t noticeable as the change happens incrementally, but, go back 10 or 20 years and it can be seen how much the game has developed. 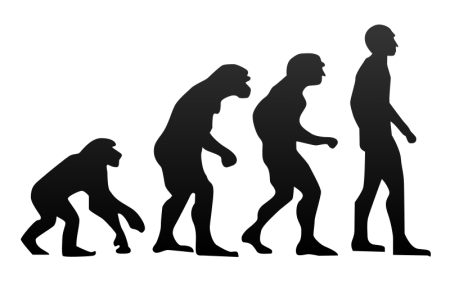 Compared to the past, modern futsal adopts a high tempo with players that possess all round abilities and are continually interchanging positions. It is interesting to note this is not unique to futsal with many other sports following the same trend over the years, recent examples including last season’s NBA Champions, Golden State Warriors, or to a lesser extent, 11-a-side football since the Barcelona of Pep Guardiola.

Modern futsal is a product of professionalism. Being full-time gave players and coaches the time to dedicate to working on their game. Spain was at the forefront of this during the 1990s, attracting top players and coaches from Brazil to supplement their own talent (See here). This melting pot of the best from around the world led to many innovations that form the basis of how the game is played today and these have continued to be refined and enhanced over the last twenty years.

Fitness levels were one of the first aspects that improved from full-time training. In this area, at the same time as the effect of increasing quantity of training, better quality training has emerged through advances in knowledge of sports science. Traditionally, fitness was built through long steady runs, which have little relation to the demands of the sport and can decrease players’ power. This has been replaced by specific exercises involving the ball that replicate the constant changes of speed and direction that are characteristic of futsal. The better physical preparation resulted in an increase in game intensity, and consequently physicality, with a high tempo being maintained for the entire duration of a match.

Tactically, with more time to train, coaches could develop strategies that used co-ordinated movements of all five players on court. These took advantage of the principle that the key to success in futsal, in either defence or attack, is creating situations where you have numbers in your favour. It can be seen how this significantly increases effectiveness, as counter attacks and fast breaks, where there is a numerical or positional advantage, have a much higher rate of goals scored than positional attacks (i.e. against a defence with all players back and in position).

Coaches aimed to maximise the numbers of players involved in the defence or attack, including utilising the goalkeeper. This obliged players to participate in both phases of play and placed increased demands on their physical, tactical, technical and decision making skills. The outcome was players that are more complete with a set of all around abilities.

One of the most noticeable tactical developments was in defence. Previously, defences had engaged the opposition deep in their own half with little intensity. Now, with increased physical capability and better organisation, they began to defend much higher up the court and with much more aggresivness in the pressure applied. To do this effectively they had to move together as a compact block, maintaining distances between each other, to create a numerical advantage around the ball and deny the opposition space. 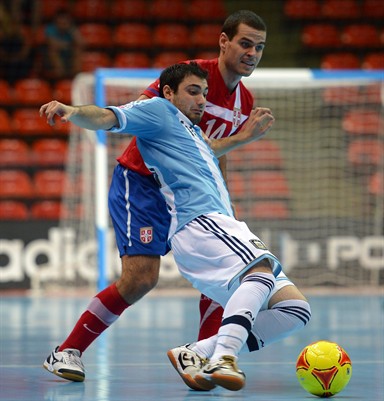 The attacking team, to counteract this full court pressing, requires every player to move and interchange positions whilst circulating the ball rapidly to find the space where the defence is less concentrated, disorganise the opponent’s defence and progress the attack. These are fundamental characteristics in the 4-0 system, and modern 3-1 systems also incorporate lots of rotation. Accordingly the more static 2-2 system, better suited to deep defences, has become less frequently utilised.

The close correlation between professionalism and the evolution of the game has been highlighted again in Spain in recent years but this time in the opposite direction. With futsal not been immune to the economic crisis that began in 2008, many Spanish teams and players have returned to being semi-professional in the last few years (the MVP of last season’s Spanish Cup was a teacher). During this time there has been a clear drop in the level of play, both on a technical and tactical level. This point is reinforced by the relationship between performance of national teams and the extent of professionalism in their leagues. While Spain’s level may have dropped slightly, the emergence of professional futsal in France has seen them improve considerably.

This presence of tactics that utilise everyone on the team has reduced the focus on the individual. Spectacular solo plays and 1v1 individual duels occur less frequently in today’s game, to the disappointment of some fans. It is much more difficult for the skilled dribbler to succeed when defenders congregate around the ball, providing cover for teammates if they beat their man. Team co-ordination and rapid ball circulation are the order of the day. 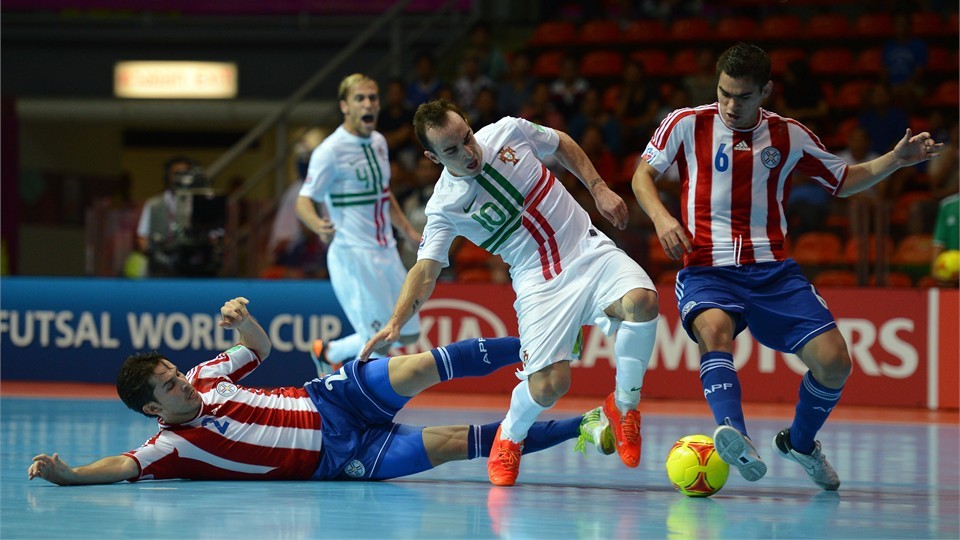 Ricardinho passes one player but another defender covers

As we look to the future and how the game will continue to evolve, has it gone too far in the focus on the team at the expense of the individual? (See previous posts here & here) A player that can go past a defender immediately creates the coveted numerical advantage that greatly increases the chances of scoring.  Trying to achieve this with fast ball circulation and synchronised movement against a well organised defence can be difficult and takes patience.

This is not to say we should, or it is even possible, to go back to the days of delivering the ball to the individual genius and waiting for them to create something alone. Like with everything, a balance is needed. Could we be upon a future era where the emphasis is more on players who can do both of these things as individual and team play are not incompatible but complementary? Creating defensive disorganisation through rapid ball and player movement, to be taken advantage of by a piece of individual magic, might be the most efficient and effective strategy.

Maybe the prototype for the player of the future is already with us in Ricardinho.  Movistar Inter’s resurgence as the top team in Spain has corresponded with the signing of the Portuguese superstar. He can play as part of a collective but also provides moments of individual brilliance.

Look at his goal from Week 2 of the Spanish League this season. His team apply a 4-0 system with lots of coordinated movements and quick ball circulation. Looking at the goal, the wingers have come high, enticing the opposition into one defensive line, creating lots of space behind. With no defensive cover, Ricardinho uses his incredible talent to take advantage of this and instantaneously converts a 4v4+GK situation into a 1vGK situation and, subsequently, a goal. A perfect combination of the collective and the individual.

It is important for coaches and players to recognise and adapt to how the game changes to ensure players are well prepared and not left behind. Survival of the fittest or natural selection are part of evolution and the players that will succeed will be those that have the best adapted  skills to thrive in this shifting environment.

Players, like all human beings, are experts in adapting to the circumstances they face so the key is that they are placed in situations during training that are appropriate. They are also efficient (i.e. lazy) so the situations must be challenging or they will not be pushed to develop and could even regress. Further they will adapt to the specific demands required and nothing else so to develop the appropriate skills the situations must resemble those of a real match.

For example, if an exercise only tests technique then a coach should be aware that there will not be much improvement in tactical understanding, physical attributes or decision making. Many of the improvements will occur naturally or implicitly, this is what is meant by “let the game be the teacher” but stopping, correcting and guiding using the knowledge and experience of the coach is essential to speed this process up and reinforce the adoption of correct habits.

Futsal is constantly evolving and it will be interesting to see how the game has changed in 10 or 20 years’ time. How will the player/tactics/teams look like at that time? Preparing players for the future is not an easy task, it requires foresight and the ability to use this to create an appropriate training environment plus time and patience for the player to be allowed to adjust and develop. No-one can know how the game will develop with certainty but the very best coaches and players will not only prepare for the game’s evolution but will also drive it.