A preview of the upcoming Futsal EURO 2016 in Serbia

The 10th edition of the UEFA Futsal Euro is nearly upon us! Below I have provided you with my thoughts on the competition, I would love to hear yours below.

The groups are as follows;

Over the years the four dominant nations in Europe have been Spain (6 titles), current champions Italy (2 Titles), Russia (1 title) and Portugal. With those four spread across the groups it would seem that the top spot in each has already been accounted for.

If I was forced to choose a group where that might not be the case then I would go for Group A which features hosts Serbia, Portugal and Slovenia. I played in both Croatia and Serbia and from experience I know that teams from the Balkans are always physically strong (a weakness of Portugal), competitive and technically good. They demonstrated this in the last Euro when Slovenia beat the eventual champions Italy and Croatia drew with Spain. The Slovenians are the upcoming nation in Europe and will be focused on doing well before they host the event in 2018. Serbia didn’t qualify last time but with the advantage of home support maybe they too could pull off a surprise. Portugal will have to be firing from the beginning if they want to avoid meeting one of their main rivals in the quarter finals.

For the other qualifying spot available in each group it will be much more competitive. I have already spoke about Group A where I expect Portugal and Slovenia to go through ahead of the hosts but we saw in 2012, where Croatia took 4th place, the impact of having a partisan crowd pushing you on.

In Group B I expect the experienced Ukraine to go through behind Spain without problems. They have an excellent record in the tournament, featuring more times than any other team except Spain, Italy and Russia, and have been runners-up on two occasions. Hungary got here after a last second extra time winner, by their main man Droth, against Romania in the playoffs and it is a success for them to qualify for the finals for the second time in their history.

Higuita got a goal & 2 assists in qualifying

Group C could be interesting. I expect Russia to qualify comfortably but the fight for 2nd place will be close. Kazakhstan have qualified for the tournament for the first time using the questionable strategy of nationalising Brazilians including the entertaining goalkeeper Higuita, named after the Colombian who made the scorpion kick famous. Their team is coached by Cacau, who is also Head Coach of European champions Kairat Almaty from the nation’s capital. He has experience of causing upsets, this being the second time he has taken the club to success in UEFA’s elite club competition. The national team is based around players from that side so, despite being the only debutants in the finals, they have experience at the highest level. My dark horses for the competition.

Croatia is an interesting team. In recent years they have received a lot of attention with their 4th place finish in 2012 and earning a draw with Spain two years ago. However, they recently had the disappointment of not reaching the next qualifying stage for the World Cup that takes place later this year. Despite Croatia usually starting strong in these tournaments before fading, due to rotating a limited number of players, and the fact I have some friends in the team I will go for Kazakhs to make the quarters.

Group D will be another tight battle for runner up spot behind champions Italy. The Czech Republic have been reliable, having qualified for every Euro and World Cup since 2001 but that run will end this year as they missed out on World Cup qualification and have had some disappointing results recently. Their opponents for the 2nd spot are the erratic but entertaining Azerbaijan. They are another of the nations that has gone down the route of adopting Brazilians. The national team is made up of nearly all players from local side Araz, both teams coached by Spaniard Tino Perez. They are stronger than the Czech Republic and, if they play to their potential, will go through.

So who will be crowned champions? There will be surprise results but for the title I can’t look outside the four obvious candidates I mentioned at the start. Portugal will be relying on the lethal partnership of the current FutsalPlanet World Player of the Year Ricardinho and club teammate Cardinal to deliver if they want to have a chance of glory. Notable is that coach Jorge Braz has not spoken about winning and only improving on last time’s 4th place. Though this is surely a ploy to take pressure off his team, I think the Portuguese won’t have enough, especially defensively, to defeat their rivals in a semi-final and then a final.

Italy are the current champions with Head Coach Roberto Menichelli implementing a style reminiscent of the Spanish. In 2014 they had the necessary fortune needed to win with a couple of narrow victories and being the first team to claim the title without having to defeat Spain along the way. With a relatively straight forward group they have the time to grow into the competition as they did in Belgium after a bad start.  2014 Player of the Tournament Gabriel Lima was their talisman then but he has not been able to replicate that form since his move to Spain. He will have to rekindle it if they are to retain their title but I don’t see them repeating the heroics of last time. 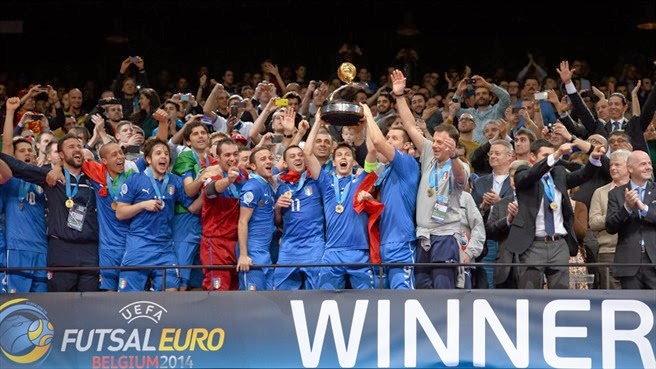 So I am left with Spain or Russia who, if they win their groups and knockout games, will encounter each other in the final. Spain have only missed the championship decider on two occasions, in 2003 and last time in 2014, and Head Coach Venancio has not been beaten over 40 minutes in major competitions since he took over back in 2007. They will be desperate to regain a title they feel is rightfully theirs. They last lifted the trophy in 2012 with a squad full of experienced and legendary players including Kike, Alvaro and Luis Amado. All of those were retired before the unsuccessful 2014 campaign. Added to this, in the losing semi-final against Russia they had their two most experienced players missing, Torras (injury and since retired) and Ortiz (suspended), and a lack of experience was their downfall. It will be down to Captain Ortiz to provide the leadership the team needs this time.

Spain’s total futsal style relies more on the team than the individual but this can still require a piece of magic to unlock a tight defence. With the inspirational Alemao long since gone, Sergio Lozano injured and Miguelin off form, this responsibility will fall on the shoulders of Adri in his first tournament with the national team. Even if this is not the formidable Spain of previous tournaments, their suffocating pressing defence will ensure they are the favourites. 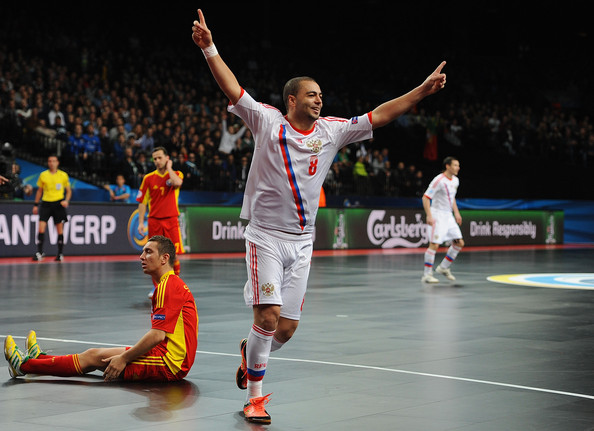 Previous to 2014, Spain had knocked Russia out of 6 of the 8 editions and so when Russia finally beat them in the semi-final it seemed they were destined to regain the title after a 15 year wait. However, the focus on overcoming their perennial rivals had cost the Russians too much mentally and they weren’t able to recover psychologically for the final. They will have learned from that experience and their mix of Russian discipline with naturalised Brazilian flair makes for a deadly combination. The latter is provided by the duo of club teammates Robinho and 2014 top goalscorer Eder Lima (see this goal from 2014) who have replaced the long standing partnership of their compatriots Pula and Cirilo. The chink in their armour could be in the goalkeeper position but I will go for Russia to repeat the success of the 1999 generation of the late Eremenko and co.

What is certain is this will be the most competitive EURO that has ever taken place with the gap continually shrinking between the strongest and weakest teams. It is sure to be an electric and entertaining spectacle and I can’t wait for it to begin! Make sure you don’t miss it!!

Games will be broadcast on Eurosport (UK Schedule Here) where I will be commentating so I hope you will join me if you can. If you don’t have access to Eurosport on your TV, you can subscribe to Eurosport Player online for 1 month (£6.99 in UK) and watch on any device such as laptop, tablet, smartphone etc. 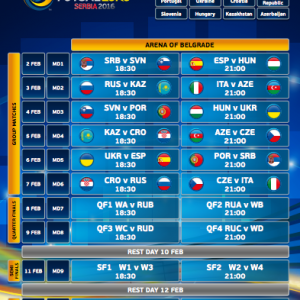