As mentioned in a previous entry, I have re-signed for Baku United FC in London, England for the 2013/14 season, having already featured for them in the first part of last season before leaving to play in Serbia.  Key to my decision to return was the high ambitions of the club.
I have been playing abroad for the majority of the last four years as that was the only way I was able to train full-time and play in a competitive league. Although the English league is still developing, with the quality of the squad Baku has put together I believe will provide me with the competitive and professional environment that I need to enjoy my futsal.
We have signed some experienced players, including Portugal’s captain Arnaldo, former Barcelona and Spain International Carlos Muñoz and World Cup winner Marcelo alongside other excellent players with varied backgrounds and experience. 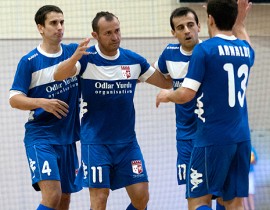 One player I would like to highlight is Marcelo who plays as a pivot and has played for some of the top clubs in the world. Despite now being in the later stages of his career (I can’t say his age!), I can attest that his stamina and physical condition is not at all diminished and during any fitness exercises he is always to be found near the front. I really enjoy training with him as I like the 1v1 battle you get when marking a pivot and his movement is excellent so I have to be focused.
Last week we played the Preliminary Round of the UEFA Futsal Cup in Poland. I watched the draw live and the one team I wanted to avoid was the Polish Champions Wisla Krakow, who I knew were a strong side. As fate would have it we were to be drawn in the same group.  Shortly afterwards  I decided I was happy with this, reflecting that it would be these kinds of challenges that would make our team stronger, even if it complicated our chances of qualifying. 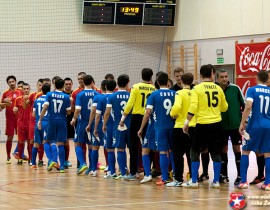 We went into our second match of the competition needing to defeat the hosts Wisla, having both won our initial games against Ali Demi from Albania, but with Wisla having a superior goal difference. In the first game we had not played our best, meaning that in just our second competitive fixture together we had to put in an excellent performance in order to win and qualify.
Despite this, I was confident that we would succeed. We had worked tirelessly in pre-season; firstly with 3 sessions a day in Spain for 2 weeks and then with 2 sessions a day for a further 4 weeks in Azerbaijan and Poland. We had good results in our friendlies including two against one of the top sides in Europe, Araz. Every day we had a meeting and video session where we analysed the mistakes we had made during training and friendly games.
It was clear that Wizla were determined to win in front of their fans and the game was very close with us taking a marginal 1-0 lead into half-time. In the 2nd half we added a couple more goals and Wizla decided to use the fly goalkeeper to try to get back into the game. However it had the opposite effect and we defended well, taking advantage when we won the ball to score in the empty net. The end result was a 7-0 win, but this doesn’t reflect the difficulty of the game.
Our victory means we have qualified for the Main Round of the UEFA Futsal Cup and we are the first English team ever to achieve this.  The celebrations that followed were amazing. In your career you have both good and bad moments, both provide valuable experience and this has definitely been one of the real highs for me.  It has brought the team closer together and we have excellent characters in the squad which is very important. We will now travel to Cyprus in October to play against sides from the host country, Czech Republic and Slovenia.
Before the tournament I was aware of the opportunity we had to help with the development of English futsal and our qualification is a step forward for the game in England. It is not just the national team doing well that can help raise the profile, as having successful domestic clubs will also mean better promotion and awareness of the game here. In addition, I think that the example of Baku will motivate all the other English futsal clubs to step up and improve, meaning it will be a more difficult task to retain the championship this year as the level of competition increases.

A final reason on my signing for the club is because I hope my return to playing in England can improve my chances of being recalled to the national team squad. I would be delighted to represent my country again and make a small contribution to a successful England National side.