Luis Amado – The Greatest of All Time?

They are some of the achievements of Luis Amado who has just announced his retirement. I recently met him at the Premier Futsal tournament in India (which he won of course!) and it was great to see him in action.

Despite such a distinguished career, his impact on futsal is much greater than the honours he won. As such it raises the debate whether he is the greatest player in the history of the game. In this post I will try to answer that question by looking back at his career, the legacy he has left and what it was that allowed him to achieve such success. 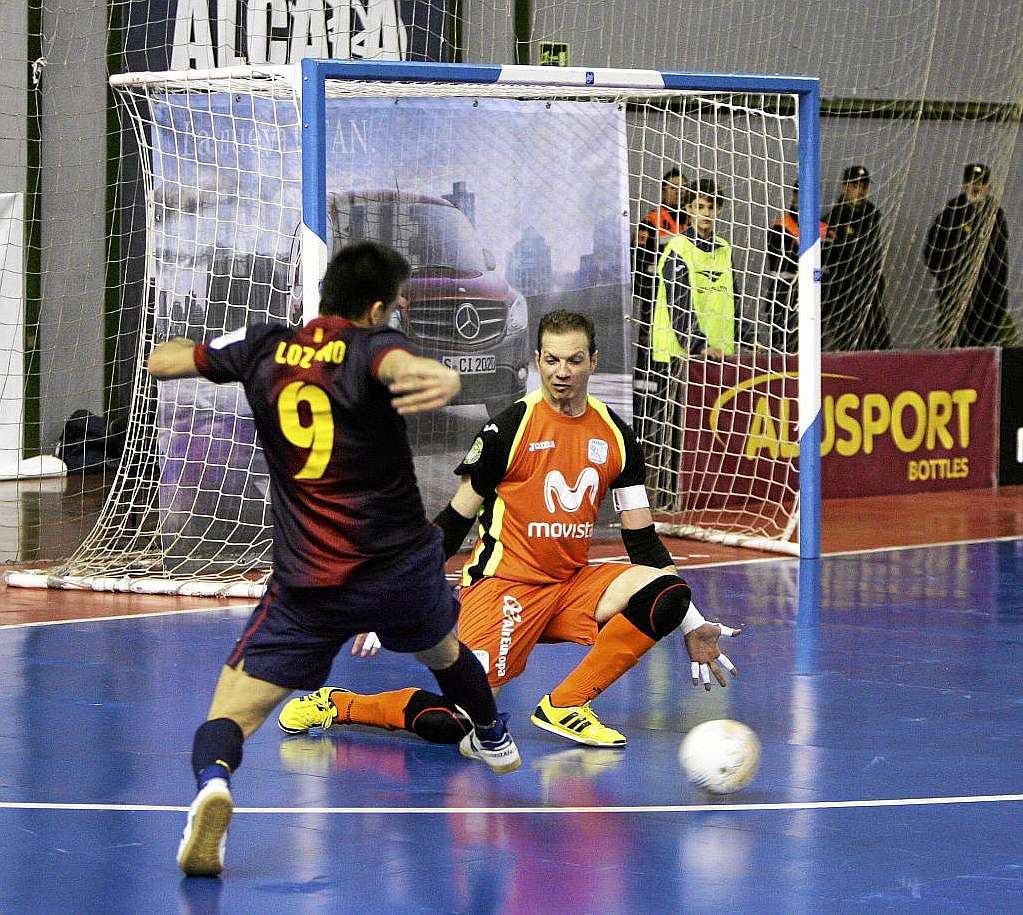 In the recent history of the game, Amado has had a prominent role. When his journey began in professional futsal in the late 1990s, Spain was still a secondary nation to Brazil and couldn’t overcome this then untouchable world power. He was part of Spain’s rise to the pinnacle of the game, culminating in a World Cup wins in 2000 and 2004, and their ability to remain there ever since.

As well as a establishing a successful era at international level, the man known as the ‘octopus’ also helped build the dynasty of Inter Movistar, who have been the clear dominant force of Spanish futsal over the last 15 years. He was an integral part of the Inter side during the middle to end of the last decade that is considered one of the greatest teams ever and earnt the nickname “the green machine”. Throughout this time the club has had many challengers but they are the only one that has remained a constant in competing for the top prizes.

The true sporting greats leave a legacy. Many stars have won multiple titles but aren’t considered among the greatest. To do this you have to redefine the game like Michael Jordan, Tiger Woods and Roger Federer have accomplished in their respective disciplines. They create a before and after.

The goalkeeper is widely regarded as the key player in any futsal team. Some quantify this, saying they are 50% or more of the team and I tend to agree. Everyone who has played futsal has experienced a game where they were the far superior team, overcoming the opponent’s defence time and time again only to be stopped by an outstanding goalkeeping performance. A goalkeeper can almost win a game on their own.

There are two schools of goalkeeping. The traditional one has its foundation in Brazil. Their goalkeepers are generally small, agile and quick. They like to dive for the low shots and come sliding out on the knees to close an oncoming attacker. Usually they prefer to wear gloves.

The second is the Spanish school which I believe is superior but that can be debated. They are tall, close angles with a cross shape and base their game on positioning. They usually tape the hands rather than wearing gloves. Amado was one of the pioneers of this form of goalkeeping.

What distinguishes the very top goalkeepers is their lack of saves compared to the opponent’s number of chances. They do this by creating a mythical presence in the mind of an attacker which incites them to miss the target through trying to be too precise or add too much power.

Amado did this to a degree never seen before or since. When he did deflect a shot, it was generally a case of rebounding off his frame rather than a reaction save. The Brazilians referred to him as “the wall”. It was not just his goal that he dominated but, through positioning and reading of the game, his entire half.

The challenge was not to score past him but to convince yourself you could.

When he retired from international duty, the former Brazil coach Fernando Ferreti said he had performed “miracles” and Spain would now have a “normal” goalkeeper like everyone else, showing that they viewed him as something out of the ordinary. It wasn’t with exaggeration when he stated without him “futsal is no longer the same.”

The effect he had on reducing his adversaries’ confidence was matched in how he boosted the assurance that his teammates felt being alongside him. I am sure this feeling would not only be limited to when the opponent was on the attack. It would have transmitted to all phases of play as tranquillity during adverse circumstances became a characteristic of the Spanish team and vital to their success.

His compatriot Jose Ruiz commented “Those that have been able to share a changing room with him have realised the influence he has and the security that he transmits when you play with him.”

My former coach and World Cup winner Alberto Riquer echoed the consensus on his impact when he observed “He changed the way of saving. That is much more than winning titles, it is leaving a legacy.”

Luis Amado earned the right to be mentioned alongside Jordan, Woods and Federer.

Luis Amado certainly developed a talent that was ahead of the rest but that only gets you so far. To achieve what Amado has achieved a certain mentality and attitude is required.  He said the key to reaching the elite level was “you have to sacrifice many things like friends, girlfriend, not going out, looking after yourself but you must train and enjoy the game above all.”

Reaching the top is a difficult task but staying there is just as demanding, if not more so. Amado was the best around for 15 years. He identified the secret to his longevity as “work, work and more work, thinking from one day to the next.”  The key to having the motivation needed to maintain such an insatiable work ethic throughout his career was a fierce competitive spirit.

You can see that with the look of disgust he had on his face on the relatively rare occasions when he conceded a goal. The current FutsalPlanet World’s Best Player Ricardinho realised this from seeing him at close quarters. “From afar, I always respected his CV a lot. When I arrived at Inter and saw how competitive he was in training, I understood why he has lasted so long. He is a reference.”

Road to the Top

It can be seen that the history of futsal and futsal goalkeeping itself would be very different today without Luis Amado but he could have easily have taken a different route in life.  At around 11 years old he was playing 11-a-side football as a defender, due to his height and strength. The goalkeeper of his team wanted to play out and Amado wasn’t keen on playing outfield so they swapped roles. However, his playing opportunities were limited as his team had a better goalkeeper.

He wanted to play and so he went with friends from his neighbourhood to their futsal team. At 15 he began playing in a local league and a few years later he started to stand out. A football team tried to attract him back but he rejected their advances as he had developed a love for futsal. At the age of 18 he was signed by 1st Division Caja Segovia after being identified by a scout at a national championship.

However, it wasn’t all plain sailing from there. The sudden jump in standard was too large and alongside a few injuries meant he struggled. He was then being coached by current Kuwait national team coach, Luis Fonseca, who told him he didn’t have a future in futsal and should try another sport. Fortunately for Amado and for futsal, he possessed the self-belief that he could make it in the game. 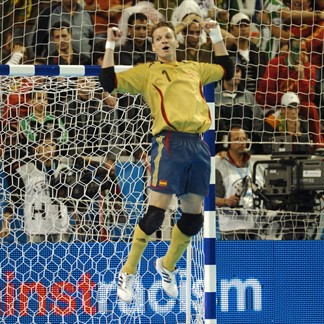 He was loaned to a 2nd division club but the following year his faith in himself would be rewarded. Segovia appointed a new coach, Jesus Candelas, and he needed a back-up goalkeeper. Amado was pencilled in for that role.

However, he became the 1st choice that season and performed so well that he was called up by the national team. His club won the Spanish Cup and, the following year, the league with a team that Amado himself describes as a collection of “cast offs”, and the most important trophy in his career. Candelas moved to Movistar Inter and took Amado with him, establishing the club as the number 1 in Spain and the world.

I see many similarities in Amado’s story to my own, if a lot less distinguished! So many things had to fall in place for him to reach his goals as well as some luck. No notable success has been achieved without good fortune. If something as simple as his teammate not wanting to play outfield hadn’t happened, he would have never taken that first step into becoming a world class futsal goalkeeper.

I also identify with the ups and downs that are part of any career. A well respected and knowledgeable coach told him he wasn’t even good enough to play futsal! To overcome this needs two things. Firstly, an impenetrable self-belief that deep down you can achieve your goals. Secondly, he needed someone who shared this faith to provide him an opportunity that he could take advantage of. In the end, during setbacks you learn many things that are essential for success.

I mention luck and opportunities which makes it seem as if these are just down to chance but this is far from true. Like Amado, in my career I have only had opportunities and been in a position to take advantage of them because I had the necessary determination, work ethic and willingness to make sacrifices. 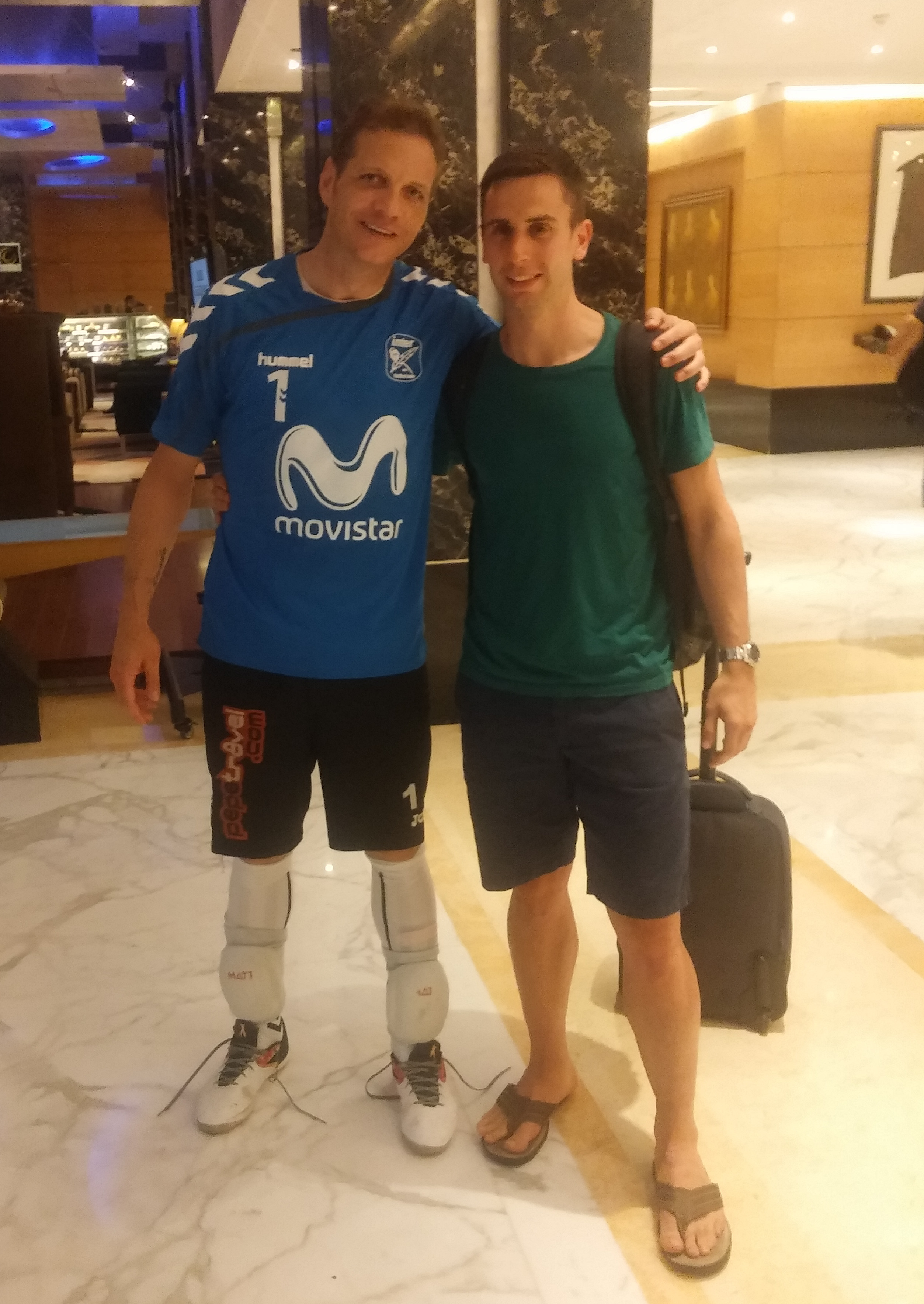 So I have looked at the achievements, legacy and skills of Luis Amado. Human nature means we like to make comparisons and the question inevitably arises; Is he the greatest player in the history of the game?

This is a difficult, if not impossible, question to answer when you are trying to evaluate players of different generations and positions. I have been involved in futsal for just over 10 years so have only seen highlights of legends such as Konstantin Eremenko, Paulo Roberto and Manoel Tobias.

Also there is a question of how you define the greatest. How do you weigh ability, consistency, longevity, impact, titles, individual awards and performance on the big stage? Each person will have the own criteria.

My personal choice is to focus on how much better a player is compared to his contemporaries. Luis Amado was just so much better than any other goalkeeper that played during his time. His superiority stood out.

I am far from being in the minority in having this opinion. Kike Boned, another key player in Spain’s golden era as well as an international teammate and club rival, simply described him as “the best goalkeeper in history by a margin.”

He has changed the game and achieved numerous titles but is he the greatest? He is without doubt one of the top candidates and for me he is the player who has had the biggest impact on his team. Let me know your opinion!