The Misconception of Futsal

But being a sport, above everything else, sometimes receives less emphasis. Its labelled a football development tool, a small-sided variant/discipline/format of football or tagged as a game of flicks and tricks.

Promoting futsal predominantly in these terms can understate how enjoyable it is to play and watch, fuel a perception of an inferior spin-off or lead to it being perceived as an exhibition activity. This diminishes the competitive and entertaining nature that provides the ability to sustain interest from both fans and players.

They may well be roles that it is capable of fulfilling and how it meets the needs of some. For the football coach it accelerates players’ development, the recreational footballer can substitute it for football due to its convenience and similarity, and freestylers or street footballers can use it as a platform to show their particular talents.

But it is like saying a book is a doorstop. It can do the job but it is not the principal function or where it provides the most value. And neither are those the core reasons futsal exists.

UEFA explain futsal’s beginnings, “Far from being a simple derivative of football played indoors, futsal was devised as a whole new sport, taking inspiration from basketball (as regards the number of players), handball (as regards the pitch), water polo (as regards the role of the referee) and, of course, football” (Boom Time For Futsal. UEFA Direct 168) 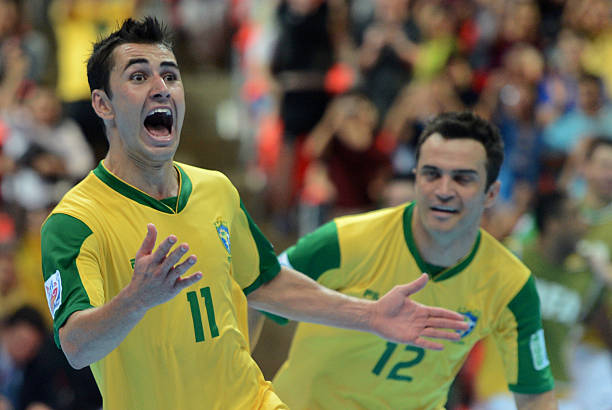 FIFA taking on the mantle of governing the game half a century after its birth seems to have created a misconception among a wider audience, but its fundamental nature is unchanged. It continues to be its own sport.

When promotiong the sport the Neymar or Messi quotes should be limited to optional extras. I understand the temptation to use these as a hook for those who aren’t familiar with the sport, but these must remain at best supplementary to a discussion on the real stars of futsal (& not just magicians Falcao & Ricardinho), the nail-biting finales, the non-stop intensity, the intricate tactical strategies and the pulsating atmospheres. A futsal match takes you on an emotional roller coaster as it ebbs and flows.

A librarian trying to loan a couple of extra books by enthusing about their capabilities as a doorstop, omitting the ability to seduce with a spellbinding narrative, would be ill-advised. If our explanations don’t intrigue the listener, then we must get better at communicating futsal’s real essence.

When someone asks for an explanation of what futsal is, and a reference to football is deemed essential, the response should not be 5-a-side or indoor football but that they share a resemblance though futsal has five players per team, a different ball, court and rules. It is a subtle difference in explanation but a crucial one.

Football is, without doubt, a great game but we are not inferior. We should not be shy to celebrate futsal’s unique qualities.

Of course, we’re all entitled to view and use futsal as we wish but I strongly contend that not emphasising it as a sport  does it a cruel disservice and is to the detriment of its long-term development.

Let’s grow the sport of futsal!