No.1 Futsal Warm Up Exercise

An ideal warm up exercise to engage your players

Whether a coach or a player, the start of training establishes the atmosphere for the rest of the session. Ideally, it should be competitive, motivating and challenging. Many warm-ups don’t do this as it becomes a process of going through the motions, requiring little thought or engagement from the players.

In this post I will explain the most popular warm up exercise used by top futsal teams including the Spanish National Team and FC Barcelona. The exercise is known as Peladao (ending rhymes with now). The name comes from the Portuguese word pelada which is equivalent to kick about or pick-up game in English. This exercise originates from Brazil but I have seen it mostly used throughout Spain.

These are the basic rules;

Below is a Spanish 1st Division team playing peladao during training. Note they are using throw ins as this was the rule in the Spanish league at the time.

Sometimes Peladao will be used as a generic name for any fun match played at the start of training. In Spain I used to play one called Total Football, basically a very limited rule game. You had a 1 touch limit and use of the hands were allowed (but you couldn’t catch the ball). There were no outs and the ball could go anywhere in the hall. It doesn’t sound very good but it was quite a lot of fun. However, usually peladao means the game played to the rules above.

Peladao is usually played very competitively but with a fun attitude. There might be a competition of several games played over several training sessions with the same teams with the loser having a forfeit that was decided before. The losers often get teased and I have seen on more than one occasion losing teammates having a temper tantrum. 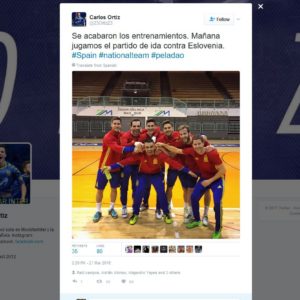 Peladao is an excellent way to start a training session that is enjoyed by players (a rondo/piggy in the middle is another one).  It creates an ideal atmosphere for the rest of a training session and that is why many of the world’s top coaches use it in their warm ups. I hope you will find it useful too.