Opinions on need for TV, what we should be teaching young players & more

Myself & Simon Wright from Manchester Futsal organised a seminar in July under a new organisation called Futsal Insights. The idea behind Futsal Insights is to deliver expert knowledge and promote collaboration in order to support the sport’s development. With the seminar we wanted to bring new or different ideas that people would find informative and valuable.

I was really pleased with the event because each speaker achieved this and there were some excellent discussions between the attendees. It certainly helped me develop my knowledge and perspectives and I want to discuss some of the things I took from the event.

Alberto Riquer, Inter Movistar Coach and World Cup winner, discussed Awareness and Decision Making before delivering a practical session on the same subject. We wanted this topic to be covered because it is often underappreciated as it is not so visible as technical or physical skills. As I explained in a previous post, Alberto was the ideal person to deliver on this subject.

Riquer opened by highlighting the importance of cognitive abilities by revealing that of the top 10 players that have played the most for the Spanish National team he would only describe one as being a skilful player in terms of technical ability. Instead, the most successful international players such as former captain Kike had relied on their game intelligence.

Riquer talks about what is needed to succeed at the highest level. Coaches take note!! More highlights from our 1st event to come. #Futsal pic.twitter.com/17y4yl6qmQ

This is a fascinating observation especially when you consider the emphasis given by many coaches when developing youth players. There seems to be an accepted assumption that young children should be taught ball mastery and dribbling skills first and then add everything else on later. Is this the best? I am not aware of any evidence for or against so rational thinking is the current best guide.

We know that integrated training such as modified game situations which work on technical, tactical, physical and psychological aspects concurrently is the most effective (see my post on this here) due to the interdependent relationships between them in match play. Here it is related to individual exercises but wouldn’t the same underlying principles apply to the long term development plan for a player? 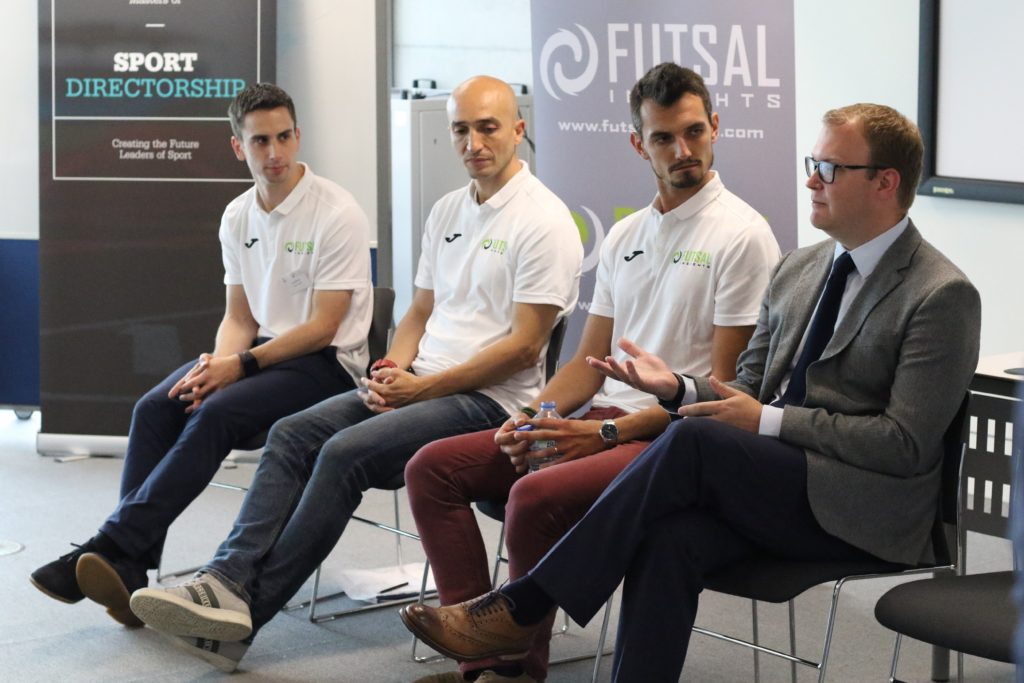 I have seen many futsal sessions allocate significant time on ‘street football’ dribbling skills or unopposed ball mastery work. These type of skills are seen from very few players in world futsal and very occasionally, suggesting they don’t provide the most efficient or effective solution for problems elite players face. So why is so much time spent on this, especially only one of the numerous technical skills players need? If the answer is because the kids find it fun or motivating then they are very valid reasons (though I find mini games are enjoyed more & challenge the player holistically) but if it is for development, shouldn’t we provide them with tools that will generally be more useful.

If player development is a priority then from young ages we need to challenge their awareness and decision making skills that, as Alberto highlighted, are needed at the highest level. There could be an argument that technique is needed first to execute tactical concepts but maybe knowing the latter will guide them on precisely which type of techniques they need to develop and motivate them to improve them. If you don’t know what outcome you’re trying to achieve, how can you know what tools you need? This will help ensure their training is relevant and efficient.

Instead of players who possess fantastic skills but can’t apply in a match what they’ve worked relentlessly to develop, let’s have skillful players that know how to use their abilities in the right situation at the right time and can apply their technical ability effectively in game situations. If we don’t teach this early we risk reducing the potential level they can reach in their game intelligence.

There have been lots of excellent seminars focused on coaching but one of the things that we wanted to do differently with Futsal Insights was to bring in experts to discuss the development of the sport and futsal industry. Anyone who is passionate about futsal has a responsibility to support the game’s progress. If we want more people to experience the joy of futsal then we can’t just be coaches, administrators or fans but need to be active promoters of the game.

At first we were going to bring a marketing expert to discuss how to better promote what futsal is. We then realised that there are many different representations of what futsal is out there so what is it we promote. We stripped it back and Jonathan Sibley from Manchester Metropolitan University produced a fantastic talk on what futsal’s identity should be and its importance for the future development of the sport. It certainly got everyone thinking about questions they had probably never considered before. Watch the full talk below.

In the discussion afterwards the subject of TV came up. The prospect and desire for TV coverage has been an enduring topic of discussion for years in English futsal. When people say we need TV, what they mean is we need visibility to attract new fans and sponsors and view TV as the means to achieve it. With the development of the technology, internet and digitisation, the media and communication industries are being revolutionised (see my post on relevance of this for futsal here) and there are now exciting alternative avenues for gaining an audience.

Music has already gone through this. 15 years ago any aspiring singer or musician had to have a physical CD album and make an agreement with a record label and music distributor to enable their work to reach the masses. Now anyone can put their music on video sharing or streaming platforms and can build a global following as many stars have done before using traditional ways to maximise their reach.

Traditionally, an aspiring sport needed TV to build a large audience. This was challenging as to get on TV the sport has to generate enough revenue to overcome the opportunity cost of putting another sport or programme on due to the limitation of channels plus the historically high cost of production. This was a huge challenge for nascent sports who hadn’t yet found their audience. Traditional sports broadcasters will have relevance for the foreseeable future, though probably through online channels, but their significance is not what it was in the past and will never recover.

Now you can capture an audience first by taking advantage of how technology has made it easy to produce content and distribute it for free to the world through social media and other online platforms. After you can look to approach the conventional and mainstream options to further increase your exposure.  These could provide futsal the visibility and awareness it desperately needs.

As well as the technology companies themselves getting involved in sports broadcasting, there are many online sport communities on social media that have built young audiences of millions that are desperate for live sports content that doesn’t require huge investment in rights. These platforms and channels have a very good understanding, through the collection of data, of what today’s audiences want and are not held back by how things were done in the past for a different generation like in the television industry.

This is the same for futsal. Though it has a long history it has not yet established itself at the elite level and is not stuck to tradition. Instead of trying to imitate other traditional sports, it can embrace innovative and disruptive technologies that will become the mainstream of the future.

Luca Oppici from Victoria University in Australia talked about his yet to be published research into futsal which has been supported by UEFA and how it can develop football skills . This is a key topic for many in the futsal community and, despite personally not having an interest in developing football players, I found Luca’s findings very engaging.

My interpretation of this is that, as futsal is such a fast moving game with rapidly changing situations, being aware of your surroundings is less useful off the ball as by the time you receive it the circumstances will have altered anyway. In football you don’t have to make such quick decisions and can decide what to do well before receiving the ball. If this interpretation is correct then this confirms what we already know about the nature and demands of futsal.

One of his studies looked at if the properties of the futsal ball have a significant role in developing football skills. There is an argument that the benefits for football from playing futsal can be acquired from alternatively playing small sided football games.

In 2013 I wrote a post called “Do Futsal & Football Need Each Other?” where I gave the opinion that most of the benefits for football players from futsal could be gained from small sided football games. I wrote at the time

“With the right type of training you can develop these players without it. There are other characteristics in futsal that help improve these skills further, such as the hard surface and heavier ball which increase the tempo. But principally, it is the space available that shapes the attributes of an FC Barcelona and a futsal player.”

The preliminary results for Luca’s latest study show decision accuracy and passing accuracy improve more from practising passing with a futsal ball than a football. The evidence he presented made me think the ball has more significance than I previously suspected. 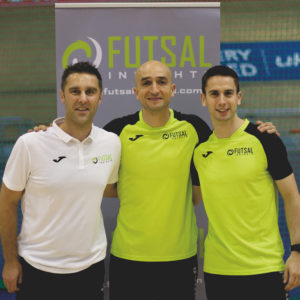 I believe there are other reasons the futsal ball, and the hard surface, mean the benefits can’t be completely reproduced through well designed football training. Firstly, they make the play quicker which places increased demands on speed of executing skills and decisions, key abilities at the highest level of football.

In addition, the futsal ball with the reduced rebound on the smooth surface is much easier to control which speeds up the learning of tactical concepts. I have seen a team that just kicked the ball aimlessly forward in football play futsal and start to make combination plays and work together far better as they had the ball under control. I am sure this helped them when they went back to football with a knowledge of how to play more effectively.

We got great feedback on the event and we will be looking to organise more soon (Hope to see you there!) where we will bring further expertise and debates to the futsal community to help develop the game. To keep up to date with Futsal Insights future events plus valuable and interesting insights from a wide range of experts follow @FutsalInsights on social media (Twitter, Facebook, Instagram, YouTube).